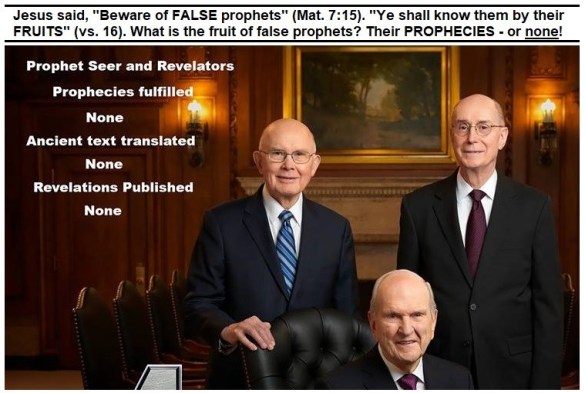 Show me a Prophet that prophecies. Or better yet show me a prophet that boldly testifies that he has seen the face of God and lives, Genesis 32:30. Just like the charge from Oliver Cowdrey “When you bear testimony that you have seen God.” DHC 2:195-196. Such that I will gain the courage myself to experience the fullness of the gospel of Jesus Christ myself, see D&C 76:14 and LoF 2:56, which is seeing God face to face. Show me a prophet of God that teaches us not to rely on him but on God. That teaches us what God’s commandments are, that we may receive God’s protection, and in preparation to see God. Wise words from Joseph Smith on the subject, “Oh! I beseech you to go forward, go forward and make your calling and your election sure; and if any man preach any other Gospel than that which I have preached, he shall be cursed; and some of you who now hear me shall see it, and know that I testify the truth concerning them.” TPJS, p. 366.

Show me a Seer that translates ancient records himself, see Mosiah 8:13 & Mosiah 28:16, instead of hiring people to translate ancient records. Show me a Seer who is translating the Book of Mormon into Hebrew to help bring the Book of Mormon to the Jews as talked about in its title page, not someone who supports political agreements to keep a school in Jerusalem at the expense of the Lord’s public stated plans. Show me a Seer who makes unknown things known, see Mosiah 8:17.

Show me a Revelator that reveals things from the Lord saying thus saith the Lord so we can know what is from the Lord and what is expounding as in ancient times and as Joseph Smith followed, who boldly teachings us the gospel not cute one line sayings from men. Show me a Revelator like Lehi who was not scared to speak the words from the Lord to the people no matter how the people would take it, vs someone who reads words from a talk that was edited for 6 months by who knows how many people and committees.

Show me a man of God who is not afraid of the arm of flesh like Jerimiah, who boldly declares what commandments we are not following.

Many will say just have faith. Let’s not forget the counsel that James gave us in James 2:14-26. Verse 20 is very instructive, “But wilt thou know, O vain man, that faith without works is dead?” What could he be saying there? The last part of verse 18 I believe will help us out, “I will shew thee my faith by my works.” For me it is clear what he is teach hear. Faith is not idling by doing nothing, but going out and doing good works in the name of God. Which also relates to what I am saying up above. What is another word for works? It is fruit. So I ask once again by what fruits are prophet, seers, and revelators known by that I may study out what they have done that I may then go to God and ask for confirmation if they are called of Him and not men, see Matt 7-15-20 and D&C 9:8. Still not convinced? Let’s see what a modern prophet taught, namely the prophet Joseph Smith, Lectures on Faith 1:9 “From this we learn … and the principle of action in all intelligent beings.” Joseph Smith says faith is a principle of action, sounds just like what James was saying, work or going out and doing good in the name of God.

4 thoughts on “In honor of today and yesterday”